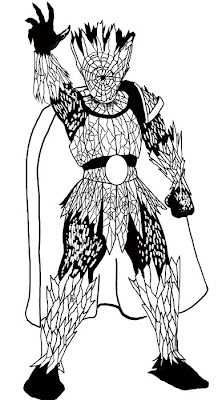 This is another concept for the comics project I've taken on. This was drawn in Photoshop with my spanking new Wacom tablet, so it looks a little rough. I'm still not used to the tablet. Give me time. I'm probably drawing the comic itself with pen and ink, so it'll be a LOT cleaner when I actually draw it in the book. This is mainly to get the idea down on, er,  paper. The pose is very consciously John Buscema-ish.

Basically, the idea behind this is that this is a knight of mirrors, who reflects your weakest secret self back at you, whatever that may be. So Batman would see a ten year old boy crying over his murdered parents, for one example. The way Natalie described him to me was interesting, but I couldn't get the image of a guy dressed up like a disco ball out of my head. I've tried to avoid that. Instead, I wanted something jagged and weird. Probably hard to draw long term, but I'll burn that bridge after I cross it. 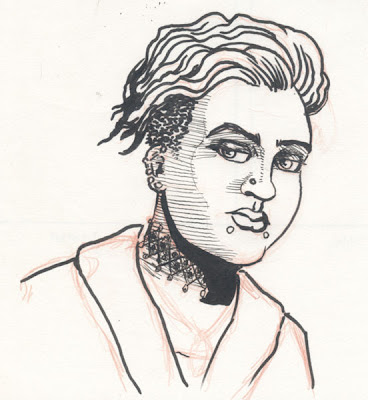 This is another of the lead characters. Headshot. Not fully developed, yet. Pitt pen over red col-erase pencil. I've been looking at a lot of Ross Campbell's stuff lately and it's seeping into the way I draw women. I feel like a piece of silly putty, taking impressions. It still looks like my work, but the influence seems obvious to me. Ah well.

I'm bound and determined to avoid the kind of same-face look that even some amazing artists indulge in. My characters will be individuals. This means models sheets, which means lots of work before I even draw a page of cartoon (and I even know what the first page looks like already, but I need to be scrupulous about this and not dive into drawing it yet). Anyway, I'm excited about the project.

Posted by Vulnavia Morbius at 11:32 AM