Some concepts for Womanthology: Space

So the first spin-off project from Womanthology is Womanthology: Space. I don't know if I'm going to be in it yet, but I'm going to proceed as if I am. So here's some concept art for the story I want to do.

The premise: Marla is a girl from a high-gravity planet who is traveling to the inner systems to go to school. Aboard her ship, she's the only high-gravity native, which is painfully obvious to everyone because it makes her short, stocky, and generally much stronger than everyone around her. The other kids on the ship are only interested in her when they want a ringer for sports. Otherwise, they treat her as a freak. Marla hates sports.

This is what Marla will look like aboard ship: 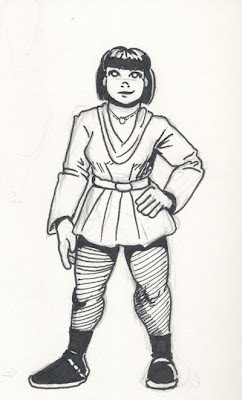 After a particularly humiliating session of bullying, the Captain approaches her. It seems a nearby scientific expedition has discovered life on a gas giant. No one in the expedition can stand the gravity on the planet, and Marla is the only person from high gravity within ten light years. They ask her to suit up in a special rig to make first contact with the aliens. The suit has a big balloon attached to it so that she can float in the atmosphere. There are attitude jets so she can maneuver. So Marla suits up and goes out to meet the aliens. Here's a sketch of the suit. 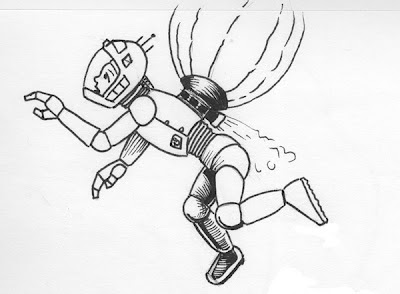 The aliens are basically a cross between jellyfish and balloons, floating high in the atmosphere in the narrow (relatively) anthropic zone of the planet. The intelligent aliens are descended from a predator species, though, like the prey species with whom they share a common ancestor, they are equipped with feeder tentacles. The prey species, or the "drifters", float in the sky in great herds trailing feeder tentacles that take nutrients from the air like orchids. The "shepherds" tend these herds, protecting them from larger predators. It's the "shepherds" who are intelligent. This is what I imagine the shepherds will look like: 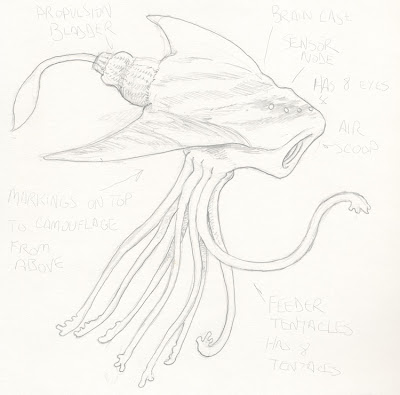 Anyway, a fun way to inaugurate my art blog, eh?
Posted by Vulnavia Morbius at 11:45 AM No comments: