I'm trying to slog to the end of my current big project. I'll be done with it by the end of November if it kills me. That still doesn't prevent hiccups from happening.

This piece is described as basically barbarians vs. giant plasma monsters, with some other game-specific instructions like what weapon the barbarian woman is holding and such. The under-drawing was quick (I did it while I was chatting with a friend on Google+ as it so happens): 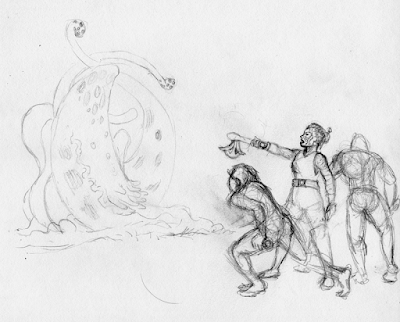 Detailed, eh? Most of the fun comes in the inking stage. Here's the inked drawing. I didn't like the trailing figure, so I drew a the archer instead as I inked it: 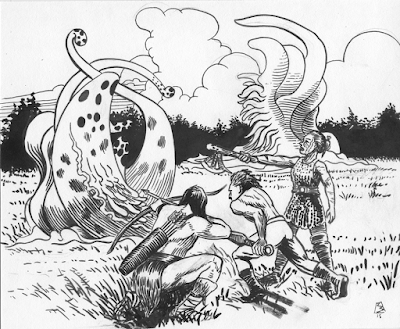 But this drawing has a couple of problems. One is an inking accident in the lower part of the drawing on the feet and legs of the two male barbarians. You can see the white paint on the thigh of the archer that I used to cover the smear there, and there's another smear under the left foot of the swordsman. Additionally, the aspect ratio is wrong. The size of the space this fits in in the final book is 2.6:5, so it's too narrow. You can also see the edge of the paper on the left side of the drawing. To the Photoshop! I corrected the contrast to get rid of the page tone of the paper, plus the stray pencil strokes that I failed to erase, I used the clone stamp tool to get rid of the ink smears, and I widened the image and extended the landscapes. These I just drew directly with my Wacom tablet (why am I not working digitally on this project? I'm not fast with digital tools, or, at least, not noticeably faster than I am with traditional materials, which I like). Here's the final version I sent to the client: 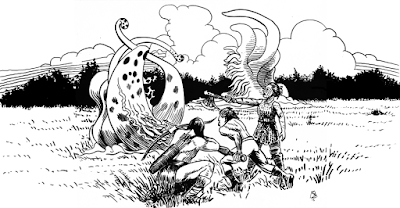 This next drawing went off without a hitch. The image popped into my mind and the drawing went very quickly. For inspiration and reference, I looked at bunch of photographs of dancers in a production of "The Rite of Spring" choreographed by Pina Bausch. This will be reproduced in a tiny space, so a lot of detail would get lost, so this is fairly simple: 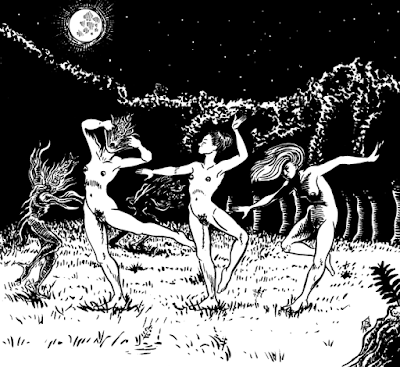 Belatedly, the client suggested that I cover the naughty bits. This surprised me a bit, because the other books in this series don't shy away from harder material and this book has plenty of gore in it. There's a dancer pulling her face off in this image, after all. But, that's fine. I'm a very compliant collaborator most of the time. Again: to the Photoshop! My client suggested fur bikinis for these figures, but I didn't like that idea, so I went with something a little more civilized: 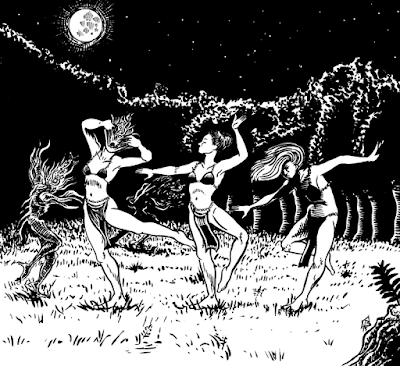 This is ultimately an example of the practice of drawing a naked figure and then drawing clothes on top of them, which is well-familiar to artists of comics. Anyway, I'm pushing through this. Here's a bonus image, one that went through more or less without a hitch, though it's more "sketch-like" than most of the other stuff I've done for this project. The dinosaur is modeled on the skeleton of a giganotosaur, and you can't actually see the tail of the beastie in the reference and I didn't draw it on the page, so I added it in Photoshop after I scanned it because I thought the drawing looked odd without it. I like the dynamism of this image: 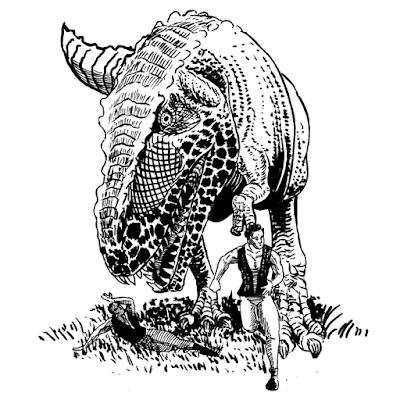 Posted by Vulnavia Morbius at 8:02 AM No comments: