Some Thoughts on Process 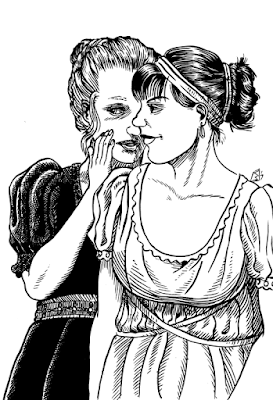 I'm currently working on a role playing game called Misspent Youth. I thought I'd share some of my process for these, and some thoughts on the economics of being an illustrator.

The above drawing is the final product for a scenario set in Regency England--a Jane Austen pastiche if you will. I'm pretty happy with this. It gave me the opportunity to draw hair and fashion, which are things I enjoy drawing. But the first draft of this drawing was awkward: 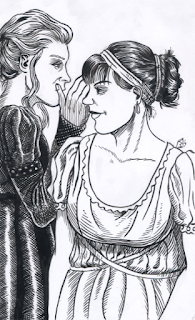 There are basically two problems with this drawing. First, the whisperer's hand is too big. Second, she's whispering to the wrong place. I work with physical media--these are brush and ink--so correcting them is a bit of a chore. The first thing I had to do was re-pose the rear figure, which meant drawing her again. This is that drawing: 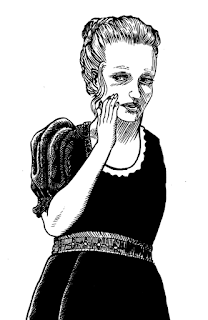 But I have too much time in this drawing.

Here's the economics of this drawing: I'm being paid $50 for this drawing and the same amount for each of the other drawings for this commission--about par for the course for role playing games--so the first thing I do with these drawings ISN'T research or penciling or whatnot, it's budgeting my time. I prefer to make a professional wage for my illustration work, which at the bottom end is about $45 an hour. I'd prefer to make more, but I'm a nobody. Lest you think that's a lot, well, here's the thing: I paid a lot of money for my art degree. I don't want to work for minimum wage. I have a mortgage and utility bills to pay, which are overhead costs that I soak up as a self-employed person. I also pay self-employment tax. So take that $45 an hour and cut it basically in half. Also: look at what a plumber or an electrician or a mechanic gets paid and tell me with a straight face that my desired rate too much (go ahead, I'll wait). Most of my projects aren't billed hourly, though. This project, for example, is paid as a flat rate. And that's fine. I actually quoted this project at a lower rate than what I'm being paid, so don't think I'm complaining about this, because these things happen sometimes.

But what this means is, I have to budget my time. Ideally, each of these drawings would take an hour to draw, and I may actually hit that mark on the others. But this one has more than that. I spent about a half-hour doing some research on Regency fashions and hairstyles for this drawing before I put pencil to paper. The pencil drawing for the first version took about 35 minutes. My under-drawings tend to be pretty loose and I do most of the fine detail work when I'm inking. I have about an hour and fifty minutes in the first version of this drawing, all told. I'm not happy about this, and it's all my own doing, but it's not a disaster just yet. I'm still making about $13 an hour at this point, which, though not ideal, is acceptable and more than I make at my horrible day job. Anyway, the new whisperer took me about 20 minutes to draw and another hour to ink, plus scanning and time to draw a mask on the original drawing and other digital noodling to make it presentable, and I think I have a bit over four hours in this drawing. That works out to about $6.25 an hour when you distill it all down. So sub-minimum wage. Fuck.

So what about the next drawing? Well, here's the sketch I sent the client: 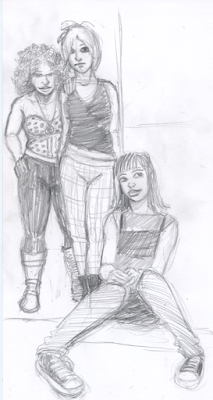 This is set in a dystopia, and features a riot grrl band (described as being people of color, which is fun for me to draw, btw). This worked out better than the first drawing, and there are no major changes pending for the final version, I hope. The client has signed off on this with some minor suggestions that I'll add in the inking stage. Once again, I have about 35 minutes in this drawing, but none of the research I did for the first drawing. So far so good. Was I able to ink this to a suitable standard in 25 minutes to hit that magical one hour mark? No. But I was able to ink it in an hour and 20 minutes, give or take. That would put me in the neighborhood of $16 an hour net, and while that's not ideal, it's not bad. I can live with that. There were some slight revisions to the finished drawing, but nothing that took more than five minutes, which is negligible. Here's the final version: 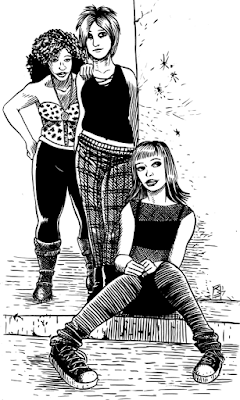 The third drawing for this commission has been a bit more difficult. I haven't got a good handle on the material yet even though I've sent the client two sketches (and will probably make a third). Brainstorming on paper is often part of the process. We'll see how it goes.

Would any of this go faster if I worked digitally? Likely not. I'm actually slower with a Wacom tablet than I am with ink and paper, and once it's scanned, it's equally editable. I don't have a Cintiq or equivalent, btw, which might make it faster to draw digitally. Beyond that, I like physical media because I have a physical object when I'm done, which I can then maybe sell. But that's another matter entirely.

If you think I shouldn't be obsessing about money as it relates to art, please allow me to direct you to Molly Crabapple on the subject who should disabuse you of that notion. Art is a job. Art is a profession. Art is work, and often tedious, mind-numbing work at that. And, yeah, you can get amateurs to work for nothing if you're ruthless and persuasive, and you can get an artist in Indonesia or Pakistan to work for next to nothing, but since I live in the USA, I have USA bills to pay and I can't pay them on $2 an hour piecework. Ah, the internet. Destroying the arts since 1995....

Also, to my client: I'm really enjoying working on this project and you should not take this as a complaint about you guys. You guys have been great.

This blog is supported on Patreon by wonderful subscribers. If you like what I do, please consider pledging your own support. It means the world to me.

Posted by Vulnavia Morbius at 5:36 PM