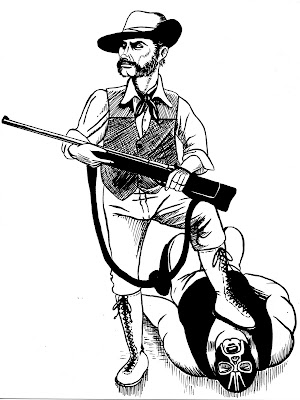 This is another illustration for a role playing game. The brief on this called for a "Most Dangerous Game" character, a big game hunter who isn't satisfied with animals. The game itself tries to recreate Mexican wrestling horror movies, hence the luchador. This is almost entirely brush and sumi-e ink on Bristol board. (I did use a pen to rule the barrel of the gun, but that's about it). I'm getting more confident with the brush. A pretty fun drawing.
Posted by Vulnavia Morbius at 7:41 PM